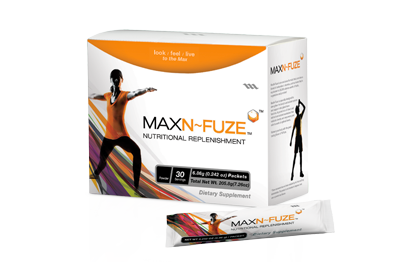 An exclusive blend of antioxidants, vitamins and nutrients  to help support your body’s glutathione levels and defend against free radicals, chemical toxins, and heavy metals.

Purpose
MaxN-Fuze™ delivers important multivitamins, minerals, direct and indirect antioxidants to provide nutritional support for cellular function while supporting Max International’s glutathione enhancing products. MaxN-Fuze works by itself to refresh and revitalize while also working with other Max products to support the function of glutathione.

General Description
Glutathione is an antioxidant that is produced and found in every cell of our body. It is the body’s master antioxidant and chief cell protector against free radicals and oxidative stress. Among the critical roles it fills, glutathione protects us from harmful toxins in the environment by acting as one of the body’s primary detoxifiers. To learn more about the essential role glutathione plays in our lives, see the Glutathione Fact Sheet.

Glutathione is the body’s master antioxidant, but it can’t protect your body from the ravaging effects of free radicals all by itself. That’s why we developed MaxN-Fuze—to fight against free radical damage and oxidative stress. The MaxN-Fuze formula helps relieve the burden placed on glutathione by supporting other major antioxidant systems. MaxN-Fuze also provides a comprehensive array of vitamins and nutrients that contribute to improving overall health and well-being.